This is our first design idea. Players each control a portion of the gelatinous creature onscreen in order to generate force that makes it move. Each component of the creature operates like a slingshot, players can pull on their portion, release, and apply a force in the opposite direction of their stretch. They need to coordinate their efforts in order to make the creature move in the net direction they desire. The prototype includes 3 demo levels with collectible items, as well as blocks that need to be smashed into before reaching the level end. 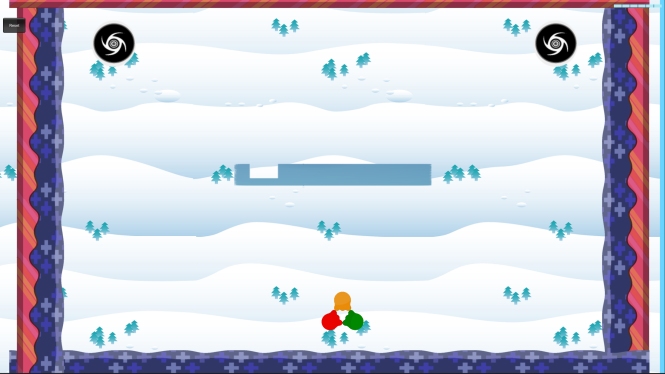 This design idea was an experiment to see if players could coordinate their collective movement by applying forces to their in-game avatar, essentially if they could work together to control one body, and have fun doing it. Unfortunately, this design did not prove successful. Faculty players found the controls unintuitive and movement stilted, as well as lacking a clear objective and a compelling reason to engage with the game at all. This was due in part to an incomplete control interface; however, the design implementation was fundamentally flawed in that it didn’t allow players enough control over what they were supposed to be doing. The amount of force generated by one player slingshotting barely moved the body, and even then it didn’t usually behave in the manner they intended. We discarded this idea after receiving feedback during our quarter milestone presentation.